Time, in terms of naming it, marking it, is a human construct, existing in this way for no other species on our planet.  Our urban environments are founded on time management, physical and mental progresses being controlled by programs, mechanical devices, decisions, all dividing each moment from another, continually seeking conformity, control of space and flow, in order that our various increasingly complex systems can function.  Paradoxically, time is in shortening supply, but we are totally dependent on our system for governing it.

Bells always signify human interaction in some way.  Tollings, chimings, ringings have been calling us to attention for centuries, warning of danger, celebrating highpoints, mourning low ones, dividing time.  Bells cut far across the soundscape - we hear them above the hurly-burly.  But the Westminster clock tower of London and the sounds of the bells it houses conjure much more than the passing of hours - the chimes, live and broadcast, have become part of major public occasions and institutions.  It's the associations that capture attention, more so than the actual sounds that are so familiar as to be heard but not fully listened to.

A while later, the work was chosen to be one of the soundscapes played at The ONCA Gallery, Brighton, during the symposium Sound and the Urban Environment organised by the University of Brighton in May/June 2015. 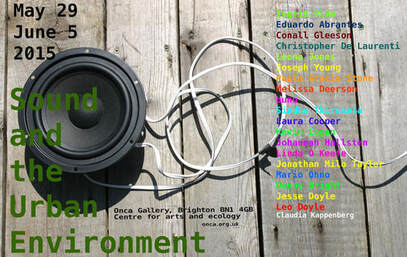 The piece was reworked much later as On Edge Redux to contribute to The Witching Hour, a week-long series of performances starting at midnight in an empty shop in Newport, South Wales, organised by performers Marega Palser and Steven George Jones.  Leona extended the work, and added live mixing during the performance.