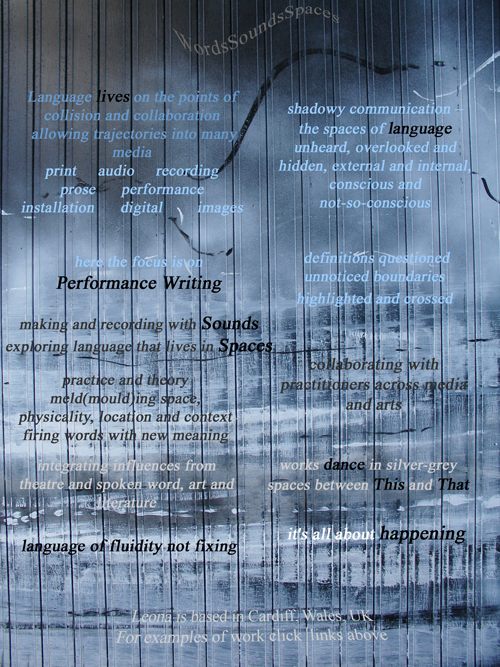 Dancing in silver-grey spaces between This and That, multi-media practitioner Leona explores the hardlyheard and underseen, the conscious and not-so-conscious to create events/performances and installations centred around language, voice, sound and spatiality.

Using field recordings, audio and site-responsiveness, as well as text, she actively seeks to highlight physicality and context.  Cross-disciplinary collaboration is central to her practice, and her work makes a concerted effort to reach into an audience’s imagination, encouraging their ability to listen.  She believes active listening to be vital to any society.

Her commitment to the inclusivity of the arts means she continually seeks to question definitions and boundaries laid down through repetition and assumption.  Leona’s work has been presented/performed in galleries, but it’s just as likely to be unexpectedly discovered responding to places and spaces not usually associated with art.

Leona's work has been financially supported by Arts Council England, Arts Council Wales and Wales Arts International, as well as a variety of individual organisations.  She was awarded Distinction in her MA Performance Writing from Dartington/Falmouth University.

Selected examples of her work appear throughout this website, and audio works also can be found on Soundcloud.  It's suggested that for best effect audio works are listened to through headphones or external speakers, rather than computer speakers.