three segments using printed text
'and the centre of word is in breath and sound, in listening and speaking'     (Don Idhe)
...form...
How does voice communicate?  Language is only one aspect.  But an important one.  And how did language begin?  What role did it play in the development of consciousness?  Or did our sense of 'being' lead to the development of such a sophisticated method of communication? 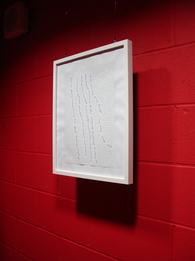 Consciousness studies and neuroscience are actively investigating questions such as this.  But how possible can it be for human minds to find answers to such self-reflective questions that twistturn in on themselves?

Whatever the answer/s, at some point vocal noise morphed in phonemes and then developed strings that became capable of carrying extreme abstractions.  The exit lobby from Studio A (the site of the live performance and soundscape), a place of transition, change, housed a text piece that paid homage to what has gone before, leading to what was next.  Inspired by Apollinaire's Il Pleut, which in its time pushed back boundaries of printing, a wall-hung text explored the development of structured voice - a movement-based exploration leading to a time of thinking.  Physically static in comparison with the performance and its sound and light, but continuing the energy flow.
...breathe... 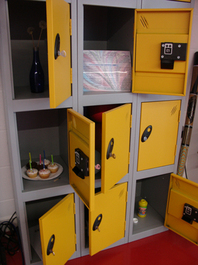 Breath is fundamental to voice and life.  There is no human voice, even an artificial voice such as Stephen Hawking's, without breath.  Unlike English, in many languages there is only one word meaning 'spirit' and 'breath'.  A great deal of the Studio A soundscape uses breath sounds, but this segment centres totally on breath.  Breath in the body crosses many boundaries - the only bodily function that is both voluntary and involuntary, marking the transition from life to death, linking consciousness and unconsciousness, air passing through capillary walls to maintain life.  Making the invisible visible a piece of writing exploring ideas around breath stands amongst 'readymades', all of which use breath either as part of their function or to complete them.

The layout of the text mirrors the physical shape of the lungs, and the text itself moves, bifurcates, divides amongst sciences and emotions to circulate around the page, flowing, continuing, coming together briefly at an underpinning statement from David Appelbaum's book Voice.
...speak... 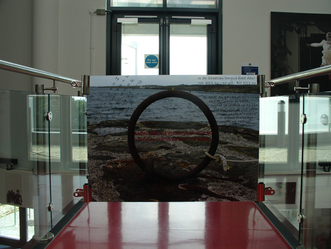 Voice speaks Word - but words do not carry equal weight.  Leona examined power differentials around Voice using the Shetland dialect as a starting point.  Shaetlan is a unique language with Nordic and Scottish roots, and to a non-speaker is an unintelligible as any other language they are not familiar with.  For centuries it was purely an oral language, and debate is now keen about the ability and political wisdom of finding a uniform way of writing it.

Taking texts extracted from a paper presented at the Dialect Conference held in Lerwick in 2004, Leona incorporated them onto a photograph she took of the working dockside of Lerwick.  She attempted to represent visually the difficulty or otherwise of understanding any language, how it develops or is made unintelligible, and the organic way in which orality grows from its landscape and reflects its particular surroundings and the interests of its people.  Blocking a walkway, this photo/text hung defiantly, but suspended in a state of fragility. 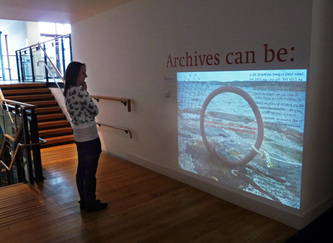 idderwirds (the title of the above work post-MA) was exhibited March - May 2013 as a projected image on an internal wall in Shetland Museum & Archives, Lerwick, Shetland, only a few metres from places where the components of the work were gathered.
...UMm Segments