the communal nature of voice, visually and aurally
'As we make words in our mouth we actually sculpt them into shape.'     (Patsy Rodenburg)
chatter
mouthings
The components of the 'mouth' space were the result of links Leona had formed with people who love reading. 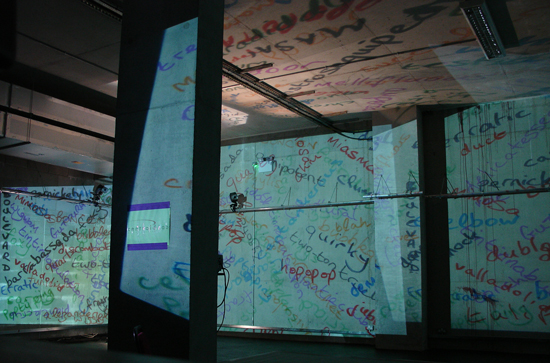 This part complemented the chatter in that it was also multi-lingual and busy, but it began silently.  A very large windowless studio was filled, graffiti-like, with written words collected from a network of contacts who enthusiastically responded to Leona's request to suggest words they loved for the sound not the meaning.  Words collected covered many languages (English, Welsh, Catalan, French, Spanish, Scots Gaelic, Shaetlan, German), and the range was immense, fulfilling Leona's ambition to connect the show to a wide geographic spread.
...UMm Index