studio-based performance
'What language and the body have in common is the voice, but the voice is part neither of language nor of the body.'   (Mladen Dolar) 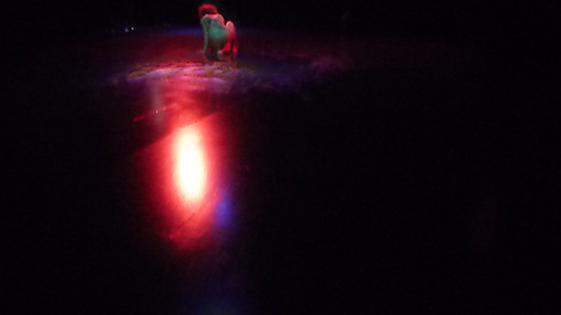 Performance Artist: Isabella Shirley-Miller
Performance still: Cynthia Whelan
This segment, Primeval, underpins ...UMm - a portrayal of the embodiment of voice, and the start of an exploration of the relationship between Voice and Consciousness and therefore what makes us human.  The piece comprises three elements working together equally - sound, light, and bodily movement - in a twenty minute sequence.  Isabella Shirley-Miller was invited to take part in the performance, working with the soundscape to embody the emergence of Voice.  Lighting added a further layer, emerging from darkness, through lengthening flickers, to a point where consciousness itself was imminent.  Leona constructed the soundscape using only her own voice and working with the phonemes of the English language.

Taking place in the blacked-out dance studio the audience was invited to find their own space to stand or sit so the performance could take place around them.  Some started their exploration of the show with the performance, others arrived having visited some of the other segments.  It was left to individuals to find their own route through the show, although a printed programme showed the sitings of all the segments.

Isabella's body paint left traces on the studio floor, a serendipitous marking of the emergence of something becoming recognisable from chaos.