in audible:
The Baroque Cello Project

in audible video still
a celebration of the hidden, the underheard, the disregarded, the nevernoticed:
the sounds, the silences, the stillnesses, and the subtleties of power always present in any act of thinking and making
visit www.baroquecelloproject.com for full details of background and all presentations 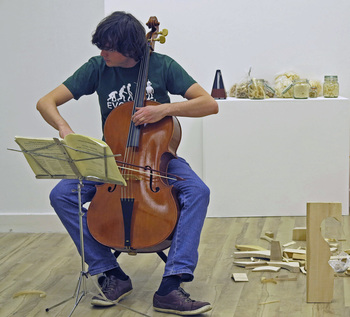 in audible: The Baroque Cello Project is a sound-led installation with video and performance, centering on a cello surrounded by the sounds of its own making.  The cello itself stands at installation centre, but equal attention is given to other elements - elements usually left out, unconsidered, or even classed as waste.  Offering opportunities for other focuses in listening and seeing, the project invites enhancement and expansion of the function/aesthetic combination that created this finely crafted musical instrument.  The project is on-going.


Part I a multi-disciplinary collaboration between Leona, Siôn Dafydd Dawson (musician), Adam Winskill (luthier) and Jeff Chapman (image maker),  following the soundshapeshifting of raw wood during the sensual, time-disdainful, intricate and brutal process of emergence of the instrument.    Within the sounds of the making process and the ephemeral products of razor-edged blades lie ignored qualities and uniquenesses.   The work was presented at Arcadecardiff, Cardiff, Wales in autumn 2014.  Funding was awarded by Arts Council England, and support was given by Arnolfini Gallery, Bristol, UK and Arcadecardiff. 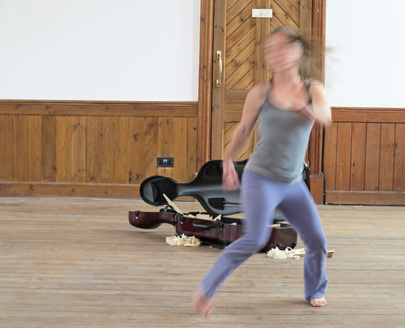 Part II   a new enquiry focusing on the subtle and complex interrelationship of sound and movement, including the deep dependence of both on silence and stillness.  Leona and Siôn were joined by contemporary dancer Laura Moy, and the new collaborative group built on and expanded ideas from the previous stage, devising a site-specific, multi-layered, immersive experimental performance.  The work was presented at The Chapel, Abergavenny, Wales early summer 2015.  Funding was awarded by Arts Council Wales/National Lottery, and support was given by The Chapel.