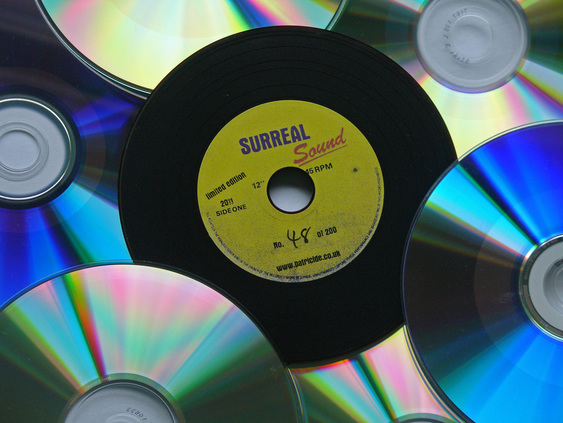 A collaborative audio game, part of Patricide No 4 journal (ed Neil Coombs).  Artists were requested to respond sonically to the notion of the 'sound of surrealism', submitting four thirty-second tracks around given concepts.  This resulted in twenty groups of four from a wide range of artists.  All the tracks were then made available for re-mixing, and some of the re-mixes, including Leona's autotelica, were included in the cd that accompanied the journal.  Below is one of her submitted short tracks, responding to the given concept 'ambience'. 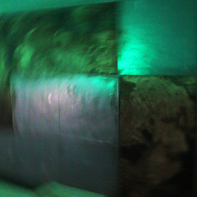 autotelica was further developed and re-worked as a site specific audio installation, created for In Other Words exhibition examining the future of writing, curated by Rowan Lear, part of Fringe Arts Bath in 2013.  It was installed in two locations within an exhibition building, a lighter version, autotelica overture, in an airy stairwell leading between exhibition spaces from the ground to first floor, and the more dark and sonically complex autotelica filling a narrow darkened corridor on the second floor leading to an equally darkened exhibition space containing an installation using a pool of water to reflect light.

This re-worked version of autotelica was used by interactive video art group Genetic Moo as part of their collaborative exhibition Microworld Margate in October later that same year.
listen to autotelica (full FAB version)
'With regard to language, nothing has captivated, and still captivates, surrealist poets so much as [the] property words have to link together into singular chains and thus to shine forth at the very moment when one is least trying to find them. What they have tried to do, more than anything else, is to bring these chains out of the dark places where they form into full daylight. And what has captured their attention about these verbal combinations, what has convinced them that they should not be altered in any way, even when they seemed either to have no meaning – no immediate meaning, that is – or to do violence to meaning, thus causing the average reader great alarm, is that their structure had the compelling character of a musical progression... In this respect, it is the direct opposite of the expression of controlled thought that has kept no organic link with music and uses it only occasionally as a luxury.'                                                                                                                (André Breton)