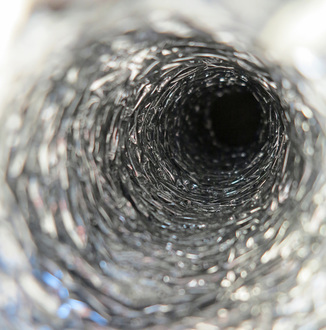 Unquiet is another exploration by Leona of site-responsiveness, focusing in this instance on the way hidden and not-so-hidden sonic elements of a place can be captured and then juxtaposed to create the ‘song’ of the space.  Taking time to listen to the empty floors of a multi-storey office block at all times of the day and night, Leona recorded the ‘voices’ of the building, ranging from majestic choral-style ‘music’ through to atmospheric percussive elements.  The sources of the sounds are not relevant, allowing the sounds themselves to become enigmatic, deprived of referentiality.  Without manipulating the recordings digitally, Leona then wove some of the raw elements together to create Unquiet, seeking to combine and enhance the natural rhythms and textures the building itself had produced.

Unquiet is also an exploration into the quality of sound as a powerful signifier of many things simultaneously – emotion, experience of spatial presence, harmony/discord, passage of time, object working with/against human.  An Uncanny form seems to be created, animated by its own sounds, taking ownership of its own spaces.
At the end of the residency, Leona invited cellist Siôn Dafydd Dawson to improvise with one of the soundscapes for an in-situ live performance.  The soundscape has none of the standard notes etc of  ‘music’, but combined with the traditional musicality of the cello a sense of emotional interaction with the building is created, both approaches demonstrating the energy generated by textural and intuitive use of sound.  Performed on one of the storeys undergoing refurbishment, surrounded by the clutter and debris of past and future uses, the result was highly atmospheric.  Along with the concentrated attention of the people present Unquiet demonstrated once again that listening is the most important part of composition. 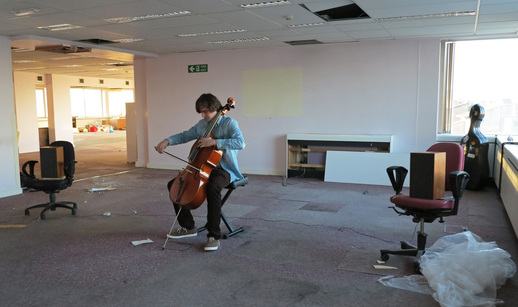 The work was the result of Leona being selected to be part of a two-month residency sited on several of the then empty floors of Brunel House, a 17-storey office block in central Cardiff, Wales.  The residency was curated by Louise Ashcroft of Floating Island Gallery, London.