Ancient Mariner: Not an Opera 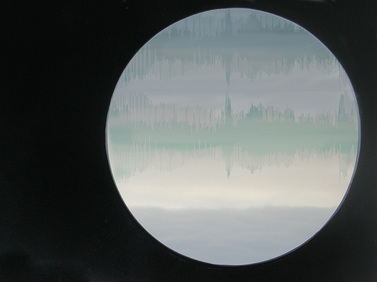 In The Rime of the Ancient Mariner Coleridge, poet of Imagination, takes familiarities which reach out to everyone, and transforms them into a meandering, horrific, beautiful, bizarre journey where rationality has no power.  It's a telling that readers ‘cannot chuse but hear’.  As outlined in Biographia Literaria , he understood imagination to be empowering in its transcendence of the confines of time and space.  Leona felt the strength of the words, the heightened intensity of storytelling in the hands/mouth of a master craftsperson, had to remain the central feature of her contribution to this collaborative project.  The poem, incorporating  the oral musicality of ballads, demanded it.  Capturing the richness of Voice, the vividness of Word, however, was not enough.  The multiplicity of interpretations that can be placed on the poem demanded a more fluid approach; mixing and metamorphosis.  Recordings of voice and elemental sounds, themselves only parts of the flow of moments in time and space,  were made, and then rendered as recognisable/un/recognisable in her response to selected key episodes in the poem, leaving openings for listeners to re-create for themselves.

Leona was invited to join artist Ivor Davies and composers Julia E Howell, Joseph Hillyard and Richard McReynolds to co-create the work through collaborative process.  Comprising live and recorded sound, electronics and acoustic instruments, and performative gesture, a disembodied quality was achieved suitable for exploring the liminal space of the poem.  With Ivor Davies acting as scribe, the performance presented possibilities - suggestions of entering the mind of the poet, a reader of the poem, or the hallucinatory experience of the Mariner himself.

The performance was a free event hosted by National Museum Wales Cardiff, filling its impressive entrance hall for two hours, allowing visitors to drop in and out during their visit, encountering an evocative diversity of sounds exploring the extraordinary meanings, thoughts and imagery beneath the words of Coleridge's epic tale of an awe-inspiring sea journey.